One of my favourite writers on creativity is the psychologist Mihaly Csikszentmihalyi. In this video of his TED talk, he explains the concept of flow for which he is famous. Flow is his answer to the question ‘What makes human beings happy?’ – ‘An almost automatic, effortless, yet highly focused state of consciousness’ that we can experience when devoting ourselves to a meaningful challenge. Flow can occur during any complex and difficult task, but you won’t be surprised to learn it is often experienced by people engaged in creative work, when it is called creative flow.

In one of the slides in his TED presentation, Csikszentmihalyi outlines the main characteristics of flow, which you may relate to from your own experience:

How Does It Feel to Be in Flow?

Early in the talk, Csikszentmihalyi presents us with the following description by a leading composer, of his experience while composing music:

You are in an ecstatic state to such a point that you feel as though you almost don’t exist. I have experienced this time and time again. My hand seems devoid of myself, and I have nothing to do with what is happening. I just sit there watching it in a state of awe and wonderment. And [the music] just flows out of itself.

This sounds like a mystical experience, yet Csikszentmihalyi offers a scientific explanation. Apparently our nervous system can only process about 110 bits of information per second. Listening to someone speak takes up about 60 bits of neurological ‘bandwidth’, which explains why we can’t listen to more than one person at a time. Because the composer is concentrating so hard on his music, he is using all his available bandwidth and there’s none left over to monitor his sense of self:

when you are really involved in this completely engaging process of creating something new – as this man does – he doesn’t have enough attention left over to monitor how his body feels or his problems at home. He can’t feel even that he’s hungry or tired, his body disappears, his identity disappears from his consciousness because he doesn’t have enough attention, like none of us do, to really do well something that requires a lot of concentration and at the same time to feel that he exists.

Takeaway: Concentration is critical to outstanding creativity – do everything you can to avoid interruptions and develop your powers of concentration. Try meditation or good old fashioned practice…

Csikszentmihalyi makes the point that the composer gives what sounds a very Romantic description of creativity, as if the Muse had taken possession of the composer or was dictating to him out of thin air. Yet he points out that this creative performance takes a huge amount of skill, which has been so honed by practice as to become practically automatic.

He says that it typically takes someone 10 years of acquiring technical knowledge by immersing themselves in a discipline before they create anything significant. Malcolm Gladwell makes a similar argument in his new book, Outliers – according to Gladwell, the magic number is 10,000 hours of practice.

The Door in the Middle of Nowhere

If the neuroscience and the daily grind of practice are in danger of taking away some of the magic of creativity for you, consider the experience of this poet, also quoted by Csikszentmihalyi in his talk:

It’s like opening a door that floating in the middle of nowhere and all you have to do is going turn the handle and open it and let yourself sink into it. You can’t particularly force yourself through it. You just have to float. If there’s any gravitational pull, it’s from the outside world trying to keep you back from the door.

Without the skill and knowledge that come from years of practice, the poet wouldn’t be able to construct a door in the middle of nowhere, or to make something meaningful of what he finds on the other side. But none of that detracts from the mystical quality of his experience as he floats through the door…

Takeaway: It takes hard work to build the door in the middle of nowhere – but a leap of faith to step through it.

Creative flow is not limited to composers and poets – Csikszentmihalyi includes businesspeople among the creative exemplars he studies:

I’ve always wanted to be successful. My definition of being successful is contributing something to the world … and being happy well doing it … you have to enjoy what you are doing. You won’t be very good if you don’t. And secondly, you have to feel that you are contributing something worthwhile … if either of these ingredients are absent, there’s probably some lack of meaning in your work.
(Norman Augustine, former CEO Lockheed Martin)

Flow doesn’t come from the extremes of self-indulgence or self-sacrifice, but from taking pleasure in using your own skills to contribute something of value to the world.

Takeaway: Ask yourself ‘What work do I love doing the most?’ and ‘Where do I contribute the most value?’. Focus your efforts on the overlap between the two.

This slide from Csikszentmihalyi’s talk shows flow located at the sweet spot between the difficulty of the challenge and your level of skill: 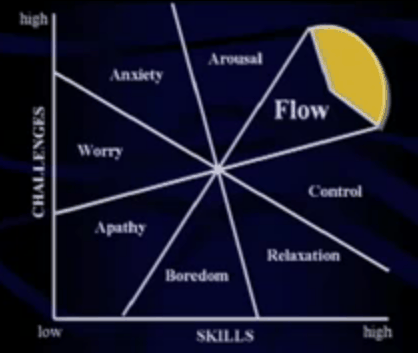 So if you take on a big challenge, you may well feel anxious at first – if you persevere and practice, you may eventually find it stimulating rather than stressful, and finally break through into flow. Or conversely, you may feel perfectly in control but bored by the lack of challenge in your work – by challenging yourself to seek out more difficult tasks, you can regain your sense of fulfilment and flow.

Looking at the chart, I guess Lou is most comfortable in the ‘control’ zone – cranking out widgets without much imagination. Jack probably spends a lot of time hovering between anxiety, arousal, relaxation and control, because he’s new to so many things and has a lot to learn – but he’s tasted enough creative flow to know that that’s where his passion lies. And one of the reasons Marla is so inspiring is that she’s constantly learning and challenging herself and others, creating flow in herself and her team.

Takeaway: Keep checking in with your feelings – are you veering towards boredom or anxiety? If you’re getting bored, set yourself a challenge; if you’re frustrated break things down and learn to do one step at a time.

Does Creativity Make You Happy?

Have you experienced ecstatic joy while absorbed in creative work?

Do you think you’d be more or less happy without the urge to create?

How important is it to find a balance between happiness and contribution, or challenge and skill, in your work?