Once upon a time it was taken for granted that the source of creativity was not the artist but the spirits, gods, or Muses, via inspiration. The word “inspiration” comes from the same Latin root as “respiration,” suggesting that the artist “breathed in” influences from outside. The opening of Homer’s Odyssey is a typical invocation to the Muse, imploring the goddess to touch the poet with divine inspiration:

Tell me, O Muse, th’ adventures of the man
That having sack’d the sacred town of Troy,
Wander’d so long at sea; what course he ran
By winds and tempests driven from his way:
That saw the cities, and the fashions knew
Of many men, but suffer’d grievous pain
To save his own life, and bring home his crew;
Though for his crew, all he could do was vain,
They lost themselves by their own insolence,
Feeding, like fools, on the Sun’s sacred kine;
Which did the splendid deity incense
To their dire fate. Begin, O Muse divine.

Homer, The Odyssey, Book I, lines 1–12, translated by Thomas Hobbes

The tradition of invoking the Muse lasted a long time. Here is Milton going through the same ritual two-and-a-half thousand years later:

Of Man’s first disobedience, and the fruit
Of that forbidden tree whose mortal taste
Brought death into the World, and all our woe,
With loss of Eden, till one greater Man
Restore us, and regain the blissful seat,
Sing, Heavenly Muse, that, on the secret top
Of Oreb, or of Sinai, didst inspire
That shepherd who first taught the chosen seed
In the beginning how the heavens and earth
Rose out of Chaos

Milton was one of the last poets to invoke the Muse with a straight face. Even though his tone is sincere, there’s a scholarly, antiquarian feel to his writing. While Homer’s goddess sounds like a living, breathing reality, Milton’s Muse sounds like someone he has only read about in a book. A hundred years after Milton, with the Enlightenment in full swing, poets still paid lip service to the convention of invoking the Muse, but it had become a mere figure of speech, often delivered with smirking irony. By the 20th century, W.B. Yeats and Robert Graves were admired for their poetry but ridiculed for entertaining the idea of Muse-inspired sacred verse. Divine inspiration had been consigned to history, one of the “childish things” humankind put away when we grew up and became rational and scientific beings.

Then in 1976 psychologist Julian Jaynes published a startling book: The Origin of Consciousness in the Breakdown of the Bicameral Mind. He argued that ancient myths and legends of gods and spirits were not fiction in the modern sense, but descriptions of actual human experience. Because human consciousness was at an earlier stage of development, it was common for people to experience visual and auditory hallucinations. Instead of a unified conscious self, they had “bicameral” minds, divided into two parts: the first part gave instructions, in the form of hallucinated voices and images; the second part received the instructions and obeyed them, taking them for the speech of gods.

In support of his hypothesis Jaynes cited a mountain of evidence from ancient literature. For example, in the first book of the Iliad, when the goddess Athena appears to Achilles and tells him not to draw his sword and kill King Agamemnon, Homer was not indulging in a flight of fancy: one part of Achilles’ bicameral mind was talking to the other, which he experienced as a hallucinated voice. The same goes for the many other ancient accounts of gods appearing to humans or speaking to them from shining clouds, burning bushes, pillars of fire, and so on. The storytellers weren’t making it up. They, or the people they spoke of, really saw and heard these things. The theory sounds far fetched but it has been given serious consideration by such a hardcore rationalist as Richard Dawkins, in his book The God Delusion.

Jaynes argued that this ancient mode of thinking has to a large extent died out in modern society, but it survives here and there: in the people diagnosed as schizophrenics; in those who practice as mediums and claim to hear the voices of spirits; and in the many artists, writers, and other creators who have described inspiration coming to them in the form of hallucinated visions or voices.

The modern, vestigial form of inspiration tends not to be as dramatic and overpowering as the ancient one. Unless you are William Blake, you’re unlikely to hear the voice of God or see angels walking down your street. It strikes in the form of an image or a phrase that pops into the mind as if from nowhere, and which is somehow loaded with significance for the artist. It’s as though you have been given a clue to a mystery, or stumbled across a trail of breadcrumbs, inviting you to follow.

Like the time I was walking along a street in London and these words suddenly appeared in my mind:

We are living in the future 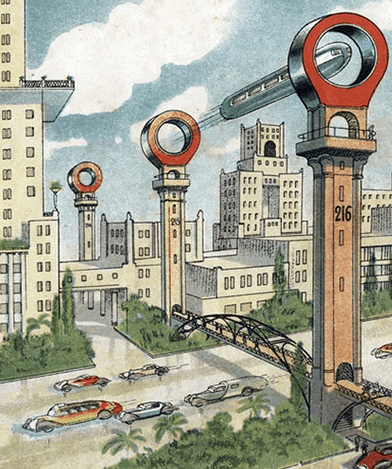 It’s hardly high-flown poetry. Just a bald statement. But it buzzed with meaning for me. I remembered my boyhood in the seventies, when “the future” described by science fiction stories and movies seemed just around the corner. The main sci-fi comic was titled 2000 A.D., which according to my calculations, would fall within my lifetime—so I looked forward to experiencing the world of jet packs, lasers, and everyday interplanetary travel.

As those words appeared in my mind, I realized I was living in the future I had looked forward to as a child. But it wasn’t quite what the comics and movies had predicted. Yes, I was surrounded by technological marvels, but the jet packs and space rockets seemed as far away as ever.

I turned the phrase over in my mind, inspecting it like an archaeologist who unearths a single roof tile and has to extrapolate from it an entire Roman villa or medieval guildhall. I only had a single line, but that gave me a lot. The voice was confident and optimistic, if slightly manic. I wasn’t sure I trusted it. I wondered who “we” might be. The line was a regular trochaic tetrameter, giving me the form of all the other lines in the poem, as well as a pounding, insistent rhythm. It was a voice in a hurry. It almost certainly rhymed, probably in a very obvious, clanging way: probably couplets or quatrains. I played around with it, trying to catch the thought and follow it through, producing this:

Looking at the line I had been given, and the ones I had written myself, I couldn’t see the join, which told me I had found the right form. Now I knew quite a few things about the voice: it was relentless, almost monotonous, like an advertising jingle repeated ad nauseam. It would feel no shame in recycling the same two rhymes for the entire poem (a digital rhyme scheme!). It wanted to sweep the listener along with its breathless enthusiasm (or was it anxiety?) for the wonders of the modern age.

Because the voice proclaimed, “We are living in the future,” I knew that everything in the poem had to have already happened, even if only recently. As the science fiction author William Gibson quipped, “The future is already here, it’s just not very evenly distributed.” So I combed my memory, news feeds, and the latest issue of Wired magazine for futuristic wonders that had already come to pass. This is what I came up with:

Tech and pharma take us further,
turn us into works of art:
seniors glow with youthful vigour,
test-tube mice glow in the dark.

You and your inspiration

Do you ever have the experience of ideas, words, images or music popping into your mind, as if from nowhwere?

Is there anything you do that makes it more likely that inspiration will strike?

What do you do with the gifts of inspiration?

Mark McGuinness is a poet and creative coach. This is an extract from Mark’s book Motivation for Creative People: How to stay creative while gaining money, fame and reputation.