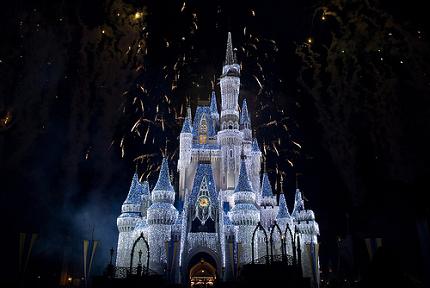 As a child, I remember being shocked to learn that Walt Disney was a person.

To me, Disney was a mysterious entity, symbolised by the magical castle that appeared at the start of every film. A cross between fairyland and a faceless corporation. A bit like Willy Wonka’s Chocolate Factory.

So it was hard to get my head around the idea that all those films were the brainchild of one man. Not to mention the theme parks. How could a single person be responsible for all of that?

Later on, I discovered that the truth was even stranger. There wasn’t just one Walt Disney. There were three.

Here’s the testimony of one of Disney’s animators:

there were actually three different Walts: the dreamer, the realist, and the spoiler. You never knew which one was coming into your meeting.

Robert Dilts uses this statement as the basis of a brilliant analysis of Walt Disney’s creative process, in his book Strategies of Genius: Volume 1. He substitutes the word ‘critic’ for ‘spoiler’, giving three distinct roles that Disney played, each of which involved a particular type of thinking and action:

More important than the individual roles was Disney’s ability to strike the right balance between them:

Creativity as a total process involves the coordination of these three subprocesses: dreamer, realist and critic. A dreamer without a realist cannot turn ideas into tangible expressions. A critic and a dreamer without a realist just become stuck in a perpetual conflict. The dreamer and a realist might create things, but they might not achieve a high degree of quality without a critic. The critic helps to evaluate and refined the products of creativity.

Disney the Dreamer could visualise extraordinary scenarios, for new business projects as well as animated films:

What I see way off is too nebulous to describe. But it looks big and glittering.

That’s what I like about this business, the certainty that there is always something bigger and more exciting just around the bend; and the uncertainty of everything else.

In Dreamer mode, Disney had the ability to immerse himself in his imagination, to the exclusion of everything else:

When Walt was deep in thought he would lower one brow, squint his eyes, let his jaw drop, and stare fixedly at some point in space, often holding the attitude for several moments … No words could break the spell …

Anyone with hypnotic training will recognise in Disney’s body language several classic indicators of a trance state – a state of mind in which conscious thought has been suspended and in which the involuntary thoughts of the imagination come to life. It would be interesting to know what creative rituals or triggers he used to access the Dreamer state when he needed it.

Without the Dreamer’s vision, Disney’s films would lack the touch of magic that sets them apart.

Disney wasn’t just a creative thinker. As a committed Realist, he made things happen – and even his dreams were rooted in reality:

I definitely feel that we cannot do the fantastic things based on the real, unless we first know the real.

Disney the Realist had a phenomenal ability to motivate and co-ordinate teams of diverse workers to bring his dreams to life. He brought the necessary perspiration to the Dreamer’s imagination:

[Our success] was built by hard work and enthusiasm, integrity of purpose, a devotion to our medium, confidence in its future, and, above all, by a steady day-by-day growth in which we all simply studied our trade and learned.

Without the Realist’s practical thinking and energetic activity, Disney’s achievements would have remained no more than a twinkle in the Dreamer’s eye.

Disney the Critic subjected every piece of work to rigorous scrutiny:

every foot of rough animation was projected on the screen for analysis, and every foot was drawn and redrawn until we could say, “This is the best we can do.” We had become perfectionists, and as nothing is ever perfect in this business, we were continually dissatisfied.

The Critic provided a valuable feedback loop in the creative process: as they cycled back through the Dreamer, Realist and Critic at different stages of their projects, Disney and his team were continually learning and extending their abilities:

in fact, our studio had become more like a school than a business. We were growing as craftsmen, through study, self-criticism, and experiment. In this way the inherent possibilities in our medium were dug into and brought to light. Each year we could handle a wider range of story material, attempt things we would not have dreams of tackling the year before. I claim that this is not genius or even remarkable. It is the way men build a sound business of any kind – sweat, intelligence, and love of the job.

Without the Critic’s perfectionistic dissatisfaction, Disney would have been satisfied with producing very good work – which, as any self-respecing creative entrepreneur will tell you, is not nearly good enough.

How You Can Use Disney’s Creativity Strategy

You’ve probably realised by now that Disney’s approach to creativity isn’t limited to animated feature films – it’s a strategy for success in any creative endeavour.

As an individual, you need to have some capability in all three roles. Most of us are naturally stronger in one or two roles, and decidedly weaker in a third. The first step is having the self-awareness to recognise this. And the next is to commit to developing the skills necessary for that role.

For example, I’m naturally very comfortable as a Dreamer and Critic – as a writer, creative thinker, storyteller and editor. But I’ve had to work much harder to develop the perspective and skills of the Realist, in areas such as management, marketing and technology.

For each project you work on, make sure you cover all three bases. These questions may help you:

At critical stages of the project, step back from your work and ask yourself:

Beware of getting the roles mixed up! I’ve worked with a lot of creatives who blocked themselves by introducing the Critic too early – before the Dreamer had a chance to finish the first draft or prototype. The Critic was pulling the work to shreds before it had even been put together! Things go much more smoothly when you allow the Dreamer to put together a rough draft, and then ask he Critic to have his say.

Another classic problem is the Dreamer who is great at creative thinking but lacks the Realist’s focus on action. And so on – the key is to achieve a dynamic balance between the different roles.

The Disney Approach to Team Creativity

You can only get so far by trying to play all three roles yourself. You can achieve much more by partnering with people whose natural strengths complement your own. If you’re a hard-headed Realist, look to team up with Dreamers and Critics.

For example, I could have invested a huge amount of time studying graphic design, animation, coding, copywriting and web marketing – and maybe become average at some or even most of them. But by working with Tony and Brian, I benefit from their expertise in all of these areas. One of the great things about being part of the Lateral Action team is that for just about anything we want to do, one of us is a specialist.

And clearly, Disney didn’t make all of those films single-handed. He didn’t just play the three roles in his head – he used them to counterbalance and direct the tendencies of his team. If he felt the team were too bogged down in detail, he would become the playful Dreamer; if they were in danger of getting lost in pie-in-the-sky fantasies, he switched roles to the Realist.

I do not know whether he draws a line himself. I hear that at his studios he employs hundreds of artist to do the work. But I assume that is the direction, the constant aiming after improvement in the new expression, the tackling of its problems in an ascending scale seemingly with aspirations over and above mere commercial success. It is the direction of a real artist. It makes Disney, not as a draughtsman but as an artist who uses his brains, the most significant figure in graphic art since Leonardo.

(Cartoonist David Low, quoted in The Game of Business by John McDonald)

Disney’s films contain some wonderful artwork. But his creative approach to the whole business of filmmaking raised ‘direction’ to the level of art. Which was arguably the most creative thing he did. Like Marla, he was an artist in business.

The Dreamer, the Realist, the Critic – and You

Do you recognise the Dreamer, the Realist, and the Critic in yourself?

Which role(s) do you feel most comfortable with?

Which role(s) do you find most challenging?

How are the three roles represented in your current team? Which roles could you do with developing within the team?